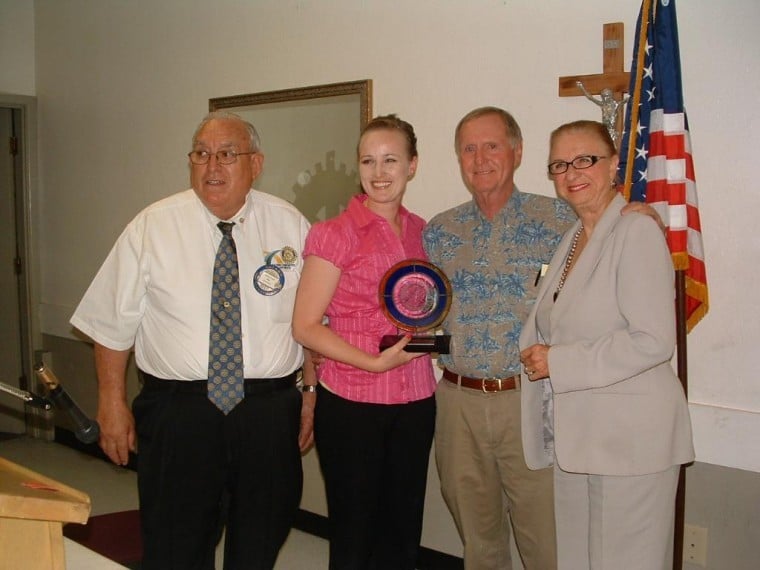 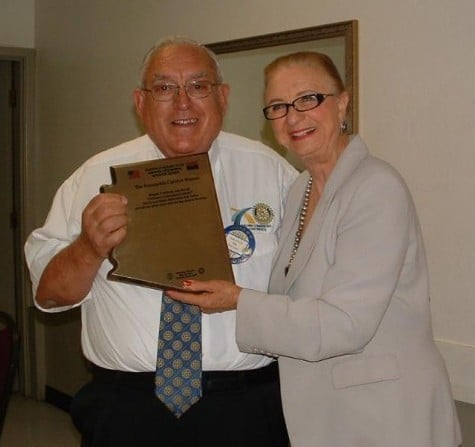 Glendale Rotary Club President Ray Nunez presents Carolyn Warner with a plaque of appreciation. Warner was the guest speaker at the club’s annual presentation of the Matt O. Hanhila Award of Excellence.
1 of 2

Glendale Rotary Club President Ray Nunez presents Carolyn Warner with a plaque of appreciation. Warner was the guest speaker at the club’s annual presentation of the Matt O. Hanhila Award of Excellence.

Matt O. Hanhila was described last week as a "wonderful individual who cared about people."

Merrill Harlan, a Rotarian who was a student at Carl Hayden High School when he first met the late educator, described Hanhila, who was principal at the time, as a man "who whatever he did, he did 100 percent. He provided for me an excellent model."

Harlan said, "A person's legacy is determined by the number of hearts he touched. Dr. Hanhila left a giant legacy."

Each year, Glendale Rotary Club honors a Glendale teacher with the Matt O. Hanhila Award in recognition of teaching excellence. This year, the honor went to Jess Eiler, a preschool special-education teacher of autistic children and children with severe delays at Melvin E. Sine School in the Glendale Elementary School District.

GESD Superintendent Joseph Quintana said Eiler's teaching specialty presents "innumerable challenges. To teach is not easy. There's no better way to describe Jess except in her own words."

Eiler's professional biography provides a glimpse into her attitude about teaching, and her philosophy of collaboration with other teachers and parents of special-education students.

"As a special education teacher, I find it challenging to name one specific greatest accomplishment in education because I think that every accomplishment of student learning deserves celebration. I have the pleasure of working with preschool autistic students ... Meeting the educational needs of my students is intriguing and satisfying because it requires ongoing adjustment and progress monitoring, creative assessment techniques, flexibility, patience, and appreciation for the qualities that make children with autism such special people ... To me, every small step in their learning is my greatest accomplishment in education."

Eiler reaches out to parents of her students, and she makes an effort to connect parents so they can help each other and share resources. She also volunteers in local community projects such as food drives and Operation Homeless Connect, as a water station server during the PF Chang's Rock N Roll Marathon, and as a member of a junior high ministry team.

As she acknowledged the honor bestowed upon her by the Rotary Club, Eiler said it was an honor to work with her students on a daily basis. She recognized Sine principal Barbara Hill as someone who gives her support in her teaching.

To present the award to Eiler, the Rotary Club invited former State Superintendent of Public Instruction Carolyn Warner, who also served as the keynote speaker.

In introducing Warner, Glendale Union High School District Superintendent Jennifer Johnson told about her own early years as a friend of Warner's own children.

"She was one of the coolest moms in the neighborhood," Johnson said of Warner. "To watch her journey and to have this opportunity, both personally and professionally, is very special to me."

Warner is founder and president of Corporate Education Consulting and treasurer for Jobs in America Graduates, and past president of Arizona Women's Forum. She served three terms as State Superintendent of Public Instruction.

Warner also released a book titled "The Words of Extraordinary Women," a compendium of quotes she collected throughout her life. It contains 700-plus quotes from more than 400 women, including Helen Keller, Eleanor Roosevelt, Mother Teresa, and Hillary Clinton.

Warner said the Matt O. Hanhila award that Eiler received "is an inspiration to all of us."

She looked toward Eiler as she said, "We honor you for what you do and who you are."

As she quoted a biblical verse from Proverbs 19, Warner talked about why America is and why it continues to have vision: "Where there is no vision, the people perish."

"Everybody is a person of consequence," Warner said. "Jess, here, remembers the vision; that's why you honor her."

She said Americans "have a commitment to family, children, the future, and we believe in educating all of the children is the insurance policy for tomorrow."

In pointing to the Statue of Liberty and its message to others around the world about embracing the poor, the tired, the weary huddled masses, Warner also had her own version of why public schools "are the manifestation, the representation of the tall symbol on Ellis Island in New York."

Warner said she would like to see her memorial to public education on a bronze plaque at every school in America. It reads as follows:

Give me your hungry children, your sick children,

your homeless and abused children.

Give me your children who need love

as badly as they need learning.

Give me your children who have talents and gifts and skills,

give me your children who have none.

Give them all to me, in whatever form they come, and the

people within these walls will help

give you the doctors and the engineers and the scientists and

We will give you the mothers and the fathers, the thinkers and

the builders, the artists and the dreamers.

We will give you the nation of tomorrow.

We will give you the future of Arizona.

We will give you the American Dream.