You have permission to edit this article.
Edit
Home
News
Advertise with Us
Services
Classifieds
Digital Editions
Obituaries
Recommended
1 of 2 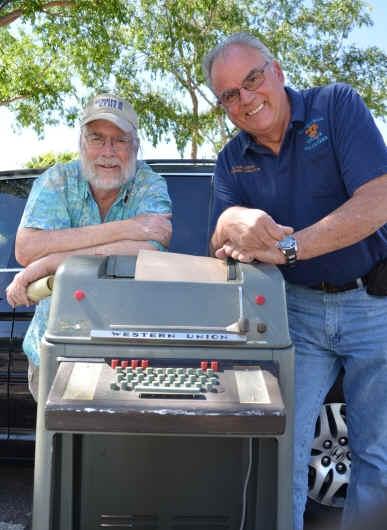 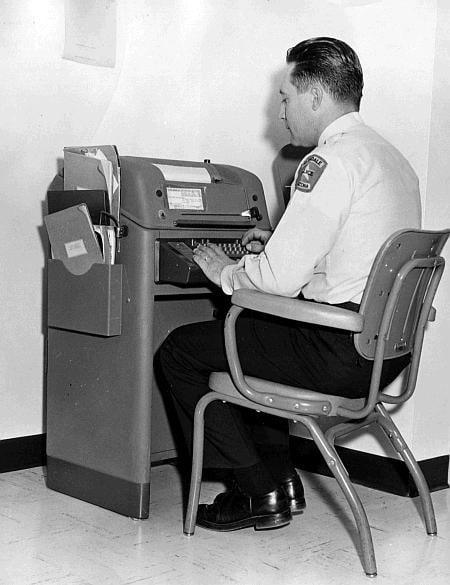 The Glendale Police Museum includes a photo of officer Sal Vetrano using the teletype machine during its heyday.

The Glendale Police Museum includes a photo of officer Sal Vetrano using the teletype machine during its heyday.

An interest in teletype machines and a friend at the Glendale Police Museum started Ed Sharpe on an interesting quest.

Time went on and Sharpe ended up with a group of teletypes he was using to build a history display on telecommunications for the deaf. Remembering back to his conversation with Kallberg, Sharpe was curious as to what model teletype the Glendale PD had used. Kallberg showed Sharpe a photograph of an officer sitting in front of a teletype, Model 28 KSR, a 5 level Baudot machine.

SMECC likes to put things out at other museums for display, so plans were made to loan the police museum a teletype just like the one in the photo. Sharpe was curious as to who the officer was, and suggested that they try to find him and pose him with the teletype unit at the museum - sort of a before and after photo.

Kallberg told Sharpe the officer’s name was Sal Vetrano, and that the photo had been taken in the new (at that time) police station (torn down, the Civic Center stands on that ground now). Vetrano had joined the Glendale Police Department in 1953 as a reserve officer, then went on as a full time officer in 1956. Vetrano stayed on until 1970, when he left the department. Kallberg states, “When Sal was an officer, he was the one responsible for starting up the PD’s photo lab, maintaining and controlling the records section of the PD, and running the front desk and assisting citizens when they came in to the Police Dept. Sal ran the teletype machine, which was connected to California, Nevada, Oregon, and Arizona.”

Armed with that information, Sharpe was able to start searching Sal out on the Internet and based on age and some vague hints on prior locale, found Sal living in Leakey, Texas, and running Vinny’s Pizzeria at 82 years of age.

Sal said he would come to pose for a “current” photo with a teletype when he comes to Arizona to visit his children.

The teletype is all in place in the museum for people to visit, and Kallberg the curator said, “The teletype machine, although slow by today’s standards, was a fast way of obtaining critical information about felony crimes that had just occurred within the Four Corners area. The teletype also freed up the telephone line at the police department for other incoming calls for service. Thanks to the efforts of Sharpe, the Glendale Police Museum was able to obtain this teletype machine for display. With Ed’s help we were able to preserve a small piece of history and put it on display so everyone could enjoy.”