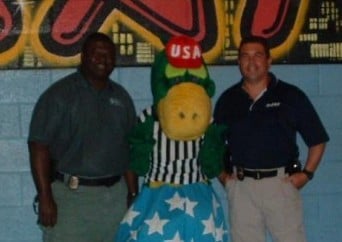 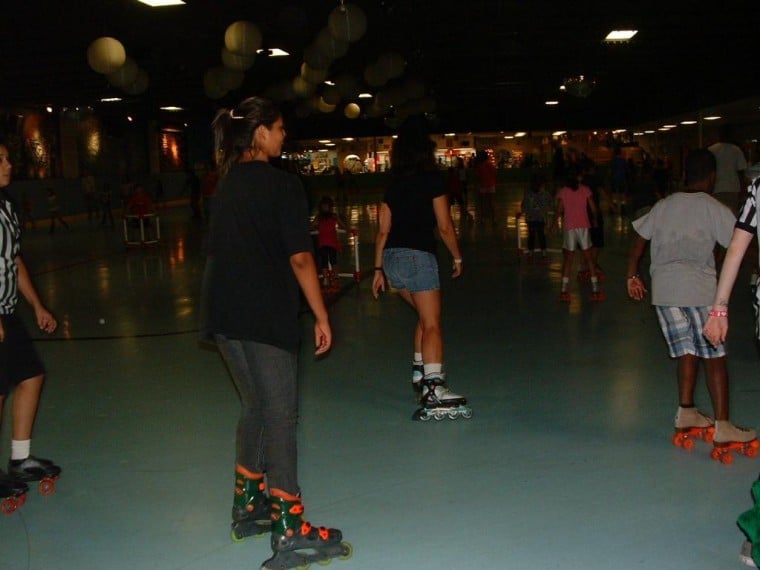 Kids of all ages take advantage of the cool, musical atmosphere at Great Skate. The roller skating facility will be the site of a benefit Aug. 30 to raise money for the D.A.R.E. programs in Glendale elementary schools.

Kids of all ages take advantage of the cool, musical atmosphere at Great Skate. The roller skating facility will be the site of a benefit Aug. 30 to raise money for the D.A.R.E. programs in Glendale elementary schools.

It's not just police officers driving around in souped-up, handpainted cars. It's not just about handing out cool stickers or toys, either.

What D.A.R.E., Drug Abuse Resistance Education, is about is spreading the word to elementary school children about the dangers of drug abuse. How it can ruin their lives and the lives of their families.

No longer a group of eight, through retirements and promotions, D.A.R.E. is down to two officers, Willie Jackson and Bud Machamer.

In these tough economic times there have been major cuts in funding. Officers Jackson and Machamer are trying to find ways to bring in additional funding to help pay for the programs. How much will it cost? Jackson and Machamer estimate the approximate costs to be $15,000 to keep both the D.A.R.E. and G.R.E.A.T., Gang Resistance Education and Training, programs alive. Since there is no federal grant as in years past, the officers are turning to fundraising events to try and raise the money they will need.

Between the two officers, they provide instruction in 22 elementary schools this year. The schools lie within five separate districts: Deer Valley and Peoria unified, Washington, Glendale and Pendergast elementary. There are a few private schools too, which include: Our Lady of Perpetual Help, St. Louis the King and Challenge Charter School. The plan is to teach 4th grade GREAT and the 5th grade DARE programs in 11 schools during the first semester and then repeat the process in the 11 remaining schools during the second semester.

In 2010, with four officers and a Federal grant, the D.A.R.E. program reached 1,743 fifth-graders. The G.R.E.A.T. program reached 1,705 fourth-graders (a six-week course) and 1,758 sixth-grade students (a 13-week course). With the two officers that remain, adjustment had to be made. As a result, the sixth-grade G.R.E.A.T. curriculum was removed from the schedule. Jackson said with just two officers, there is just not enough time or enough resources available.

D.A.R.E. actually has courses written for classes from K-12, however there aren't any agencies with the resources to teach the entire curriculum and still reach as many different schools as possible.

Remember, each officer travels to a different school every day of the week. And, while they are at the schools, they are also performing School Resource Officers duties.

Machamer said, "We're actually a school resource for that day."

They are available to help with parent/teacher meetings as well as handle any criminal activity that may take place that day.

"Also," Machamer said, "we can certainly, by invitation, go into a classroom and talk about problems such as stealing or bullying. In government class, we can come in and talk about constitutional rights and responsibilities."

"If we lose contact with the schools, we're going to lose those opportunities," Machamer said.

One of those programs will still go on: Jackson's Internet Safety workshop for parents coming up Nov. 2 at Ironwood High School.

Jackson and Machamer just wrapped up the G.R.E.A.T. Summer Program. This is a six-week program, which consists of three sessions, each running for two weeks. Each session has a new group of about 45 kids attending. It is designed to be a combination of fun activities and educational classes. During the summer program, kids learned CPR basics from the Glendale Fire Department (Dr. Janet Boberg). Tony and Carol LeConte brought in their stargazing equipment and taught about the stars and night sky. Police department EOD (Explosive Ordinance Device) personnel taught about firework safety, and SWAT officers came out to teach about their duties and responsibilities. In addition to those classes, children went on field trips for live theater performances at Arizona Broadway Theatre, skating at Great Skate, fun at the bowling alley and swimming at Sunsplash.

"It's education and fun mixed together," Machamer said, adding that it cost about $16,000 to host the summer program this year.

They were able to keep the cost down with help from generous sponsors including Wal-Mart , Walden Martial Arts, The Home Depot, and Lowe's. The program also received a very sizeable donation from the Anthony Holly Foundation.

This is Machamer's sixth year of teaching D.A.R.E., while Jackson is starting his 15th year. The two officers are not giving up on the programs, but they are just beginning to learn about the lives of fundraisers. It is a new line of work for them. They have lots of ideas that they want to try. Their plans include a bowling day at Glenfair Lanes (a business that has been very generous to them in the past). Jackson and Machamer also give Great Skate a lot of credit for hosting DARE skate days in the past, and now, the benefit fundraiser planned for 5:30 to 8 p.m. Aug. 30. The event is geared toward school kids of any age, but is open to the public. The cost is $6 per person, which includes skate rental. Raffle tickets will be available for prize drawings throughout the evening, and refreshments can be purchased at the snack bar.

Both men acknowledge how difficult it is to get people to come out for events, especially on a Tuesday night. But they also hope those individuals and businesses that have helped them in the past will continue their donations of time and money.

With just $1,000 in their nonprofit status account - D.A.R.E. Glendale is a 501(c) (3) nonprofit - they are trying to promote their Skate Night to the entire community. Even if you cannot skate or do not plan to attend, you can still donate. Send checks (made out to Glendale Police DARE-GREAT unit) to either Officer Machamer or Officer Jackson, c/o Glendale Police Department, 6835 N. 57th Drive, Glendale, AZ 85301.

Sometime in the future, they want to hold a special night for students who graduate from the D.A.R.E. program, and add a recognition portion of the evening for all of the donors that helped to keep the program alive in Glendale.