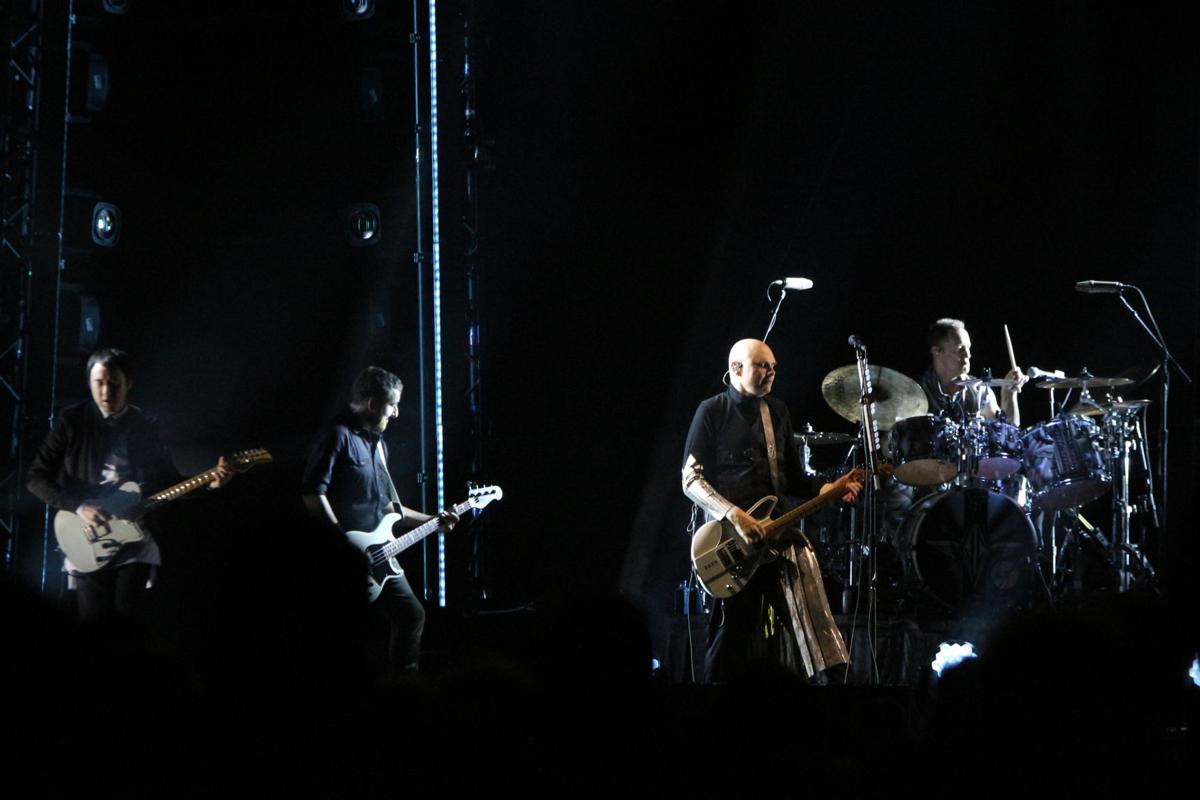 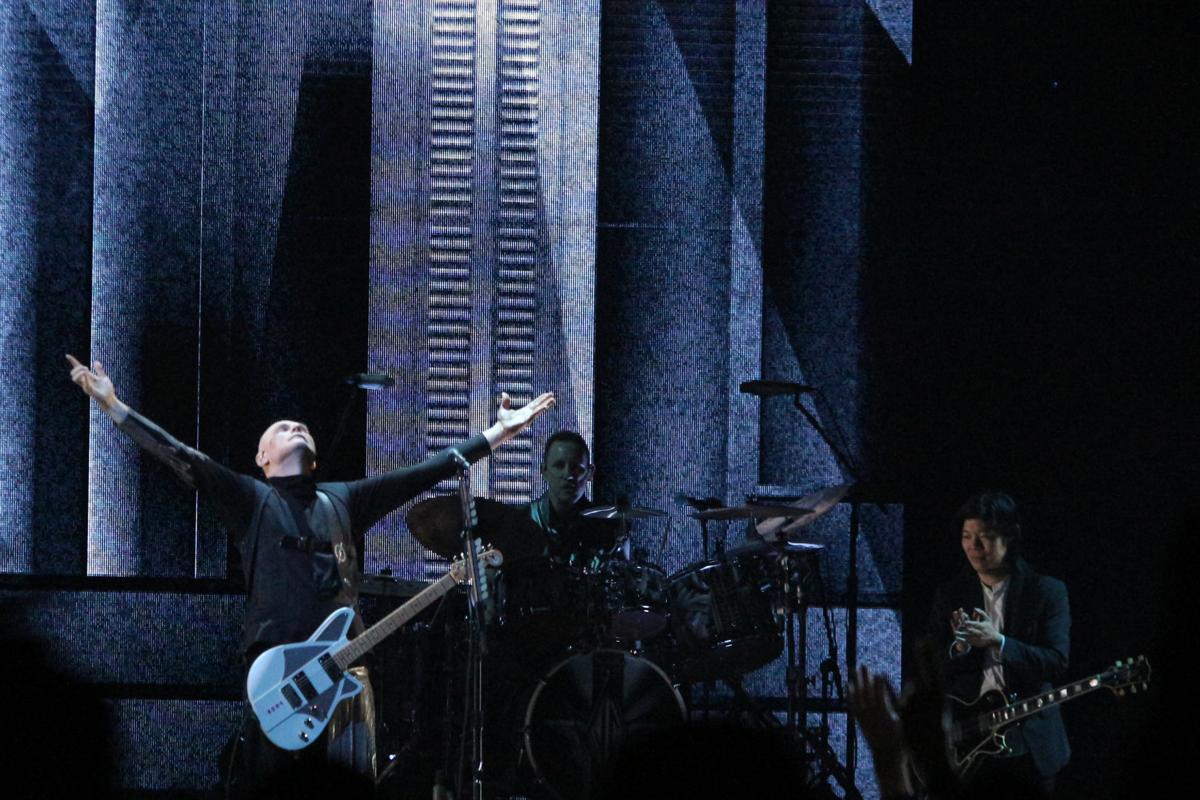 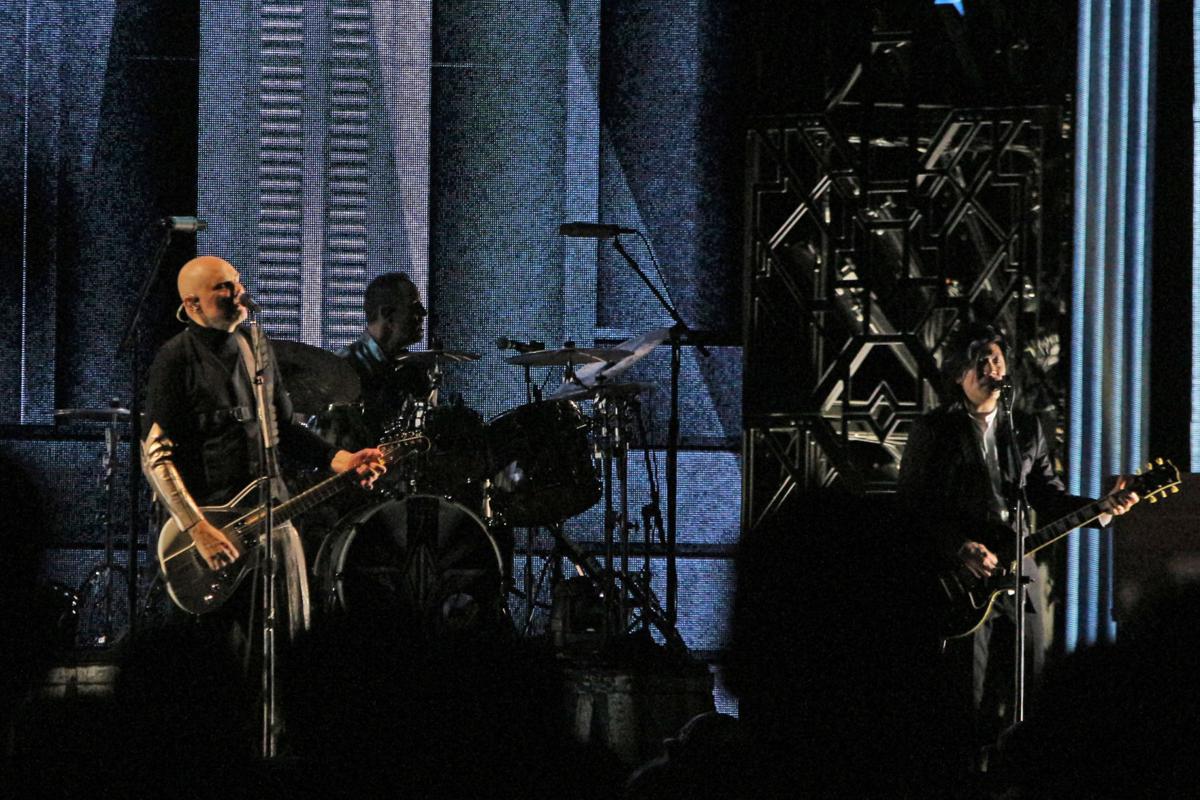 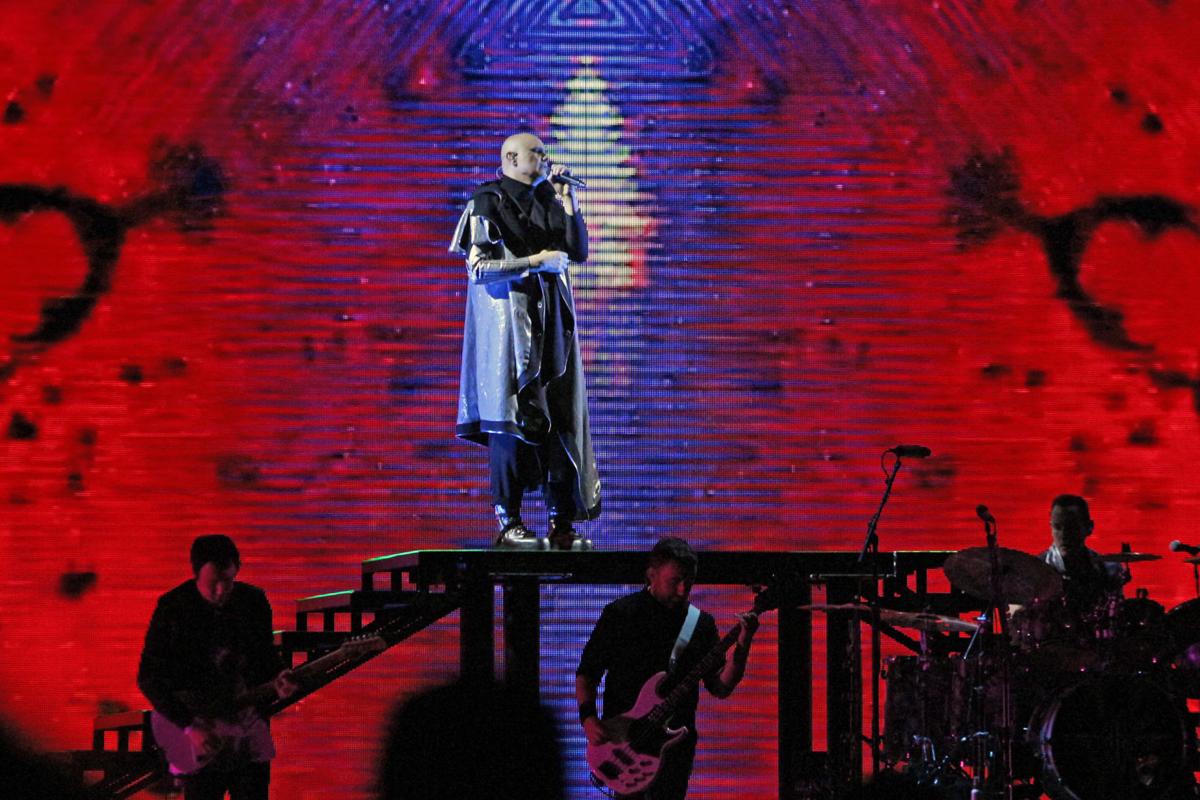 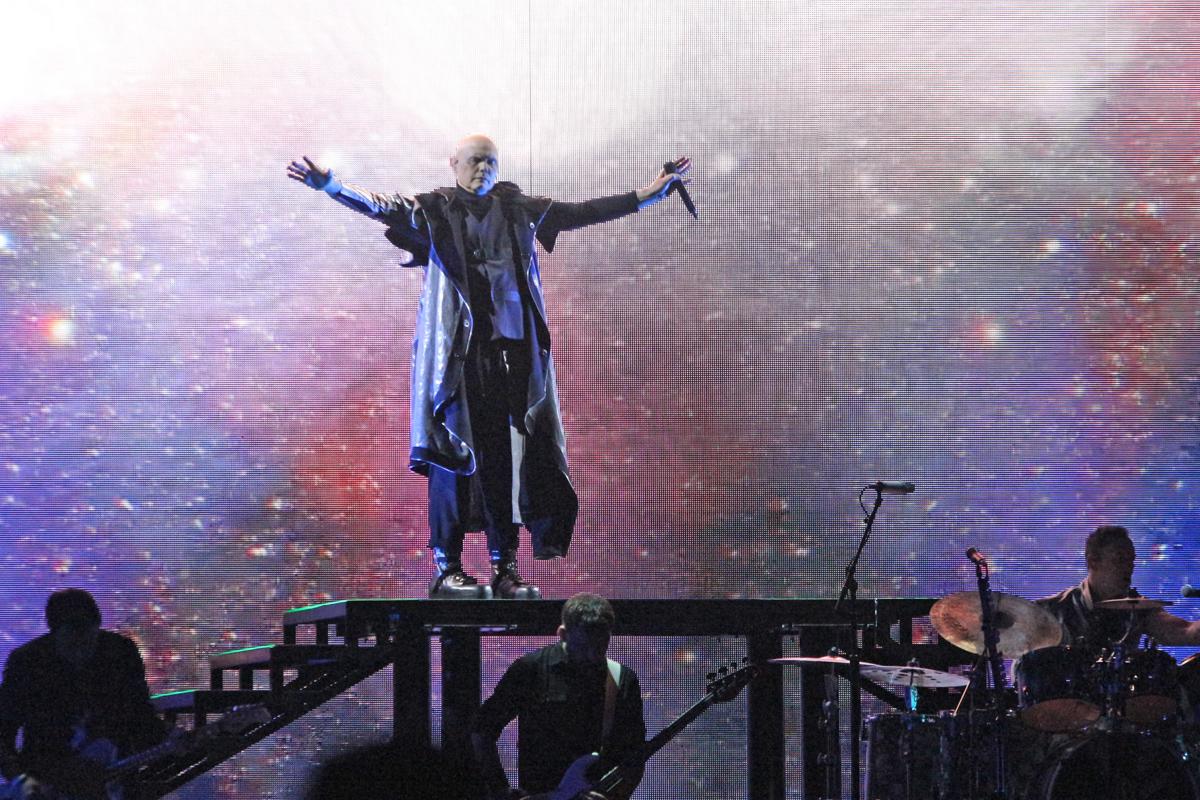 Billy Corgan listens to the crowd during their July 12 performance at Gila River Arena. 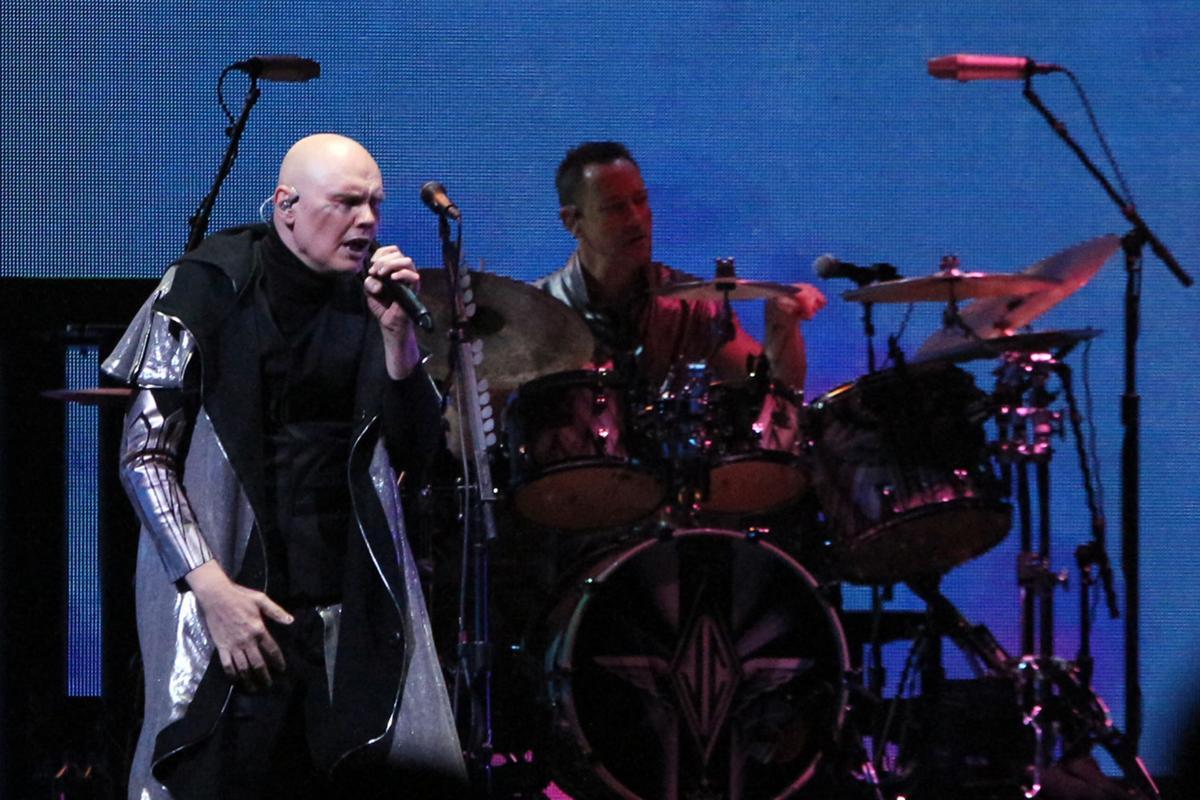 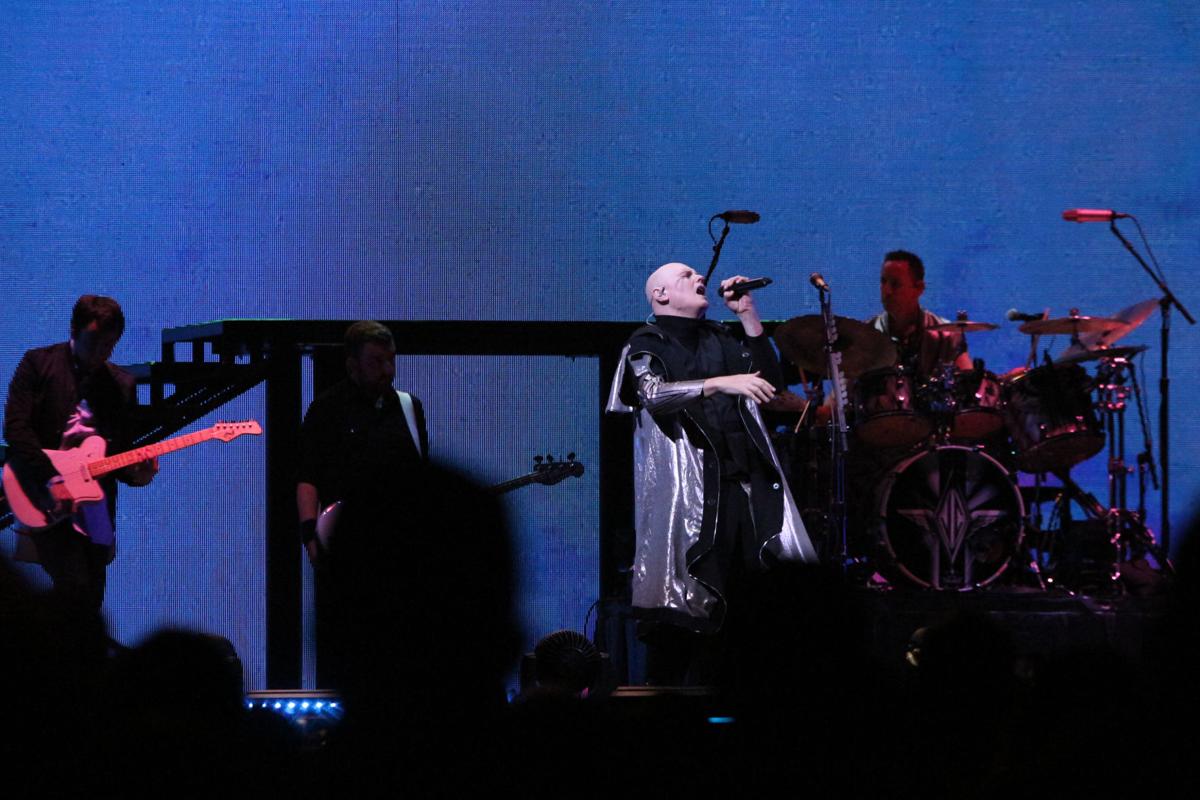 The Smashing Pumpkins perform during the Shiny and Oh So Bright reunion tour opener at Gila River Arena July 12.

Billy Corgan listens to the crowd during their July 12 performance at Gila River Arena.

The Smashing Pumpkins perform during the Shiny and Oh So Bright reunion tour opener at Gila River Arena July 12.

After nearly 18 years apart, three of the original members of the Smashing Pumpkins have reunited to tour after the release of their first new song in June.

“I grew up with this band and have been waiting for them to get back together and now, it is finally here,” Surprise resident Donald Wainright said before the concert. “The only thing missing is the original bassist (D’Arcy Wretzky) but I am pumped for this concert.”

Lead singer Billy Corgan and drummer Jimmy Chamberlain have been mainstays in the group, but the return of lead guitarist James Iha from an 18-year hiatus gave fans the show they had been waiting for, even without the return of Wretzky.

The band showed immense growth with an over-the-top theatrical concert that featured 31 songs in the three plus hour show. They played nearly all the hits songs from the past, to unexpected songs they had not played in years to covers from Led Zeppelin’s "Stairway to Heaven," and a cover of the Dumbo theme.

After blazing through one of their biggest hits, “Tonight, Tonight,” Corgan settled in behind a piano on stage as Iha yelled to the crowd, “Stairway to Heaven! Give it up!” The band then settled into a near perfect cover of the song with men in robs walking towards the stage carrying a Jesus-like statue in the middle of the crowd.

The stage was decorated with large videos screens that showcased videos from the past while album covers were flashed behind them while they performed songs from each of their albums.

The band did not disappoint as they rocked a near full Gila River Arena for three hours playing all the hit songs to a cheering, welcoming crowd.

Titled the Shiny and Oh So Bright Tour, lead singer Corgan opened the show with one of the groups biggest hits, “Disarm” to a cheering, screaming crowd before reaching to blast our “Silva: from the album "Gish" with a head banging version that showed an electrifying display of guitar playing from Corgan.

Another cover they performed to perfections was David Bowie's "Space Oddity," which showed a departure from the band that came off as an extension of their past. They also performed a cover of Fleetwood Mac’s “Landslide” which had the crowd singing along like it was their own song.

The band surprised fans by playing some lesser known songs and B-sides and rarities such as “Try, Try, Try,” and “Blew Away.”

Corgan was clearly in control at the front of the stage, enjoying the opportunity to share those memories in a large arena and throwing himself into delivering lyrics as essential to a Smashing Pumpkins crowd.

They ended with “Today,” Bullet With Butterfly Wings,” and “Muzzle” before walking off the stage to a roaring crowd. They returned with the encore where they finished with the new single, “Solara” and “Baby Mine” cover from Dumbo.

After the show, fans were in awe of the performance as they exited the arena.

“Wow, that was amazing,” Glendale resident Juan Gomez said. “That was a great show and they played nearly all the songs I wanted to hear. I will say, that was worth the money I spent, great show.”

"Stand Inside Your Love"

"Porcelina of the Vast Oceans"