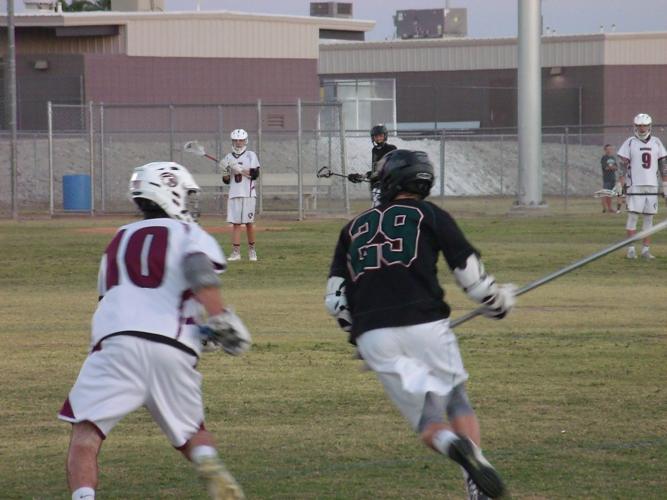 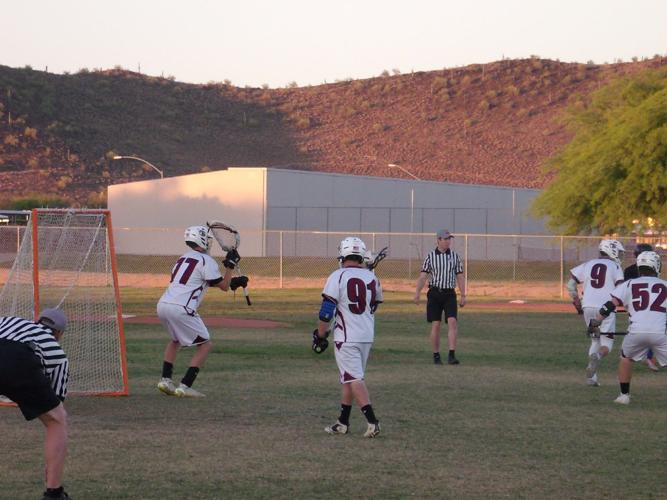 Mountain Ridge defenders Will Kelley (91) and Colin Rampata prepared to defense an attack by Campo Verde.

Photo by Darrell Jackson
1 of 2

Jan Tavrytzky wanted his sons to play sports and decided in 2010 that lacrosse was what they wanted to play, but there were no programs in the area.

So he decided to do something about it.

“We started the Arrowhead Warriors when my twin boys were in sixth grade,” Tavrytzky said. “This was a group of 5th and 6th graders that I had coached earlier in soccer and flag football and they all started lacrosse together and realized it was a great sport.”

After realizing that the lone program in the area was a ‘for-profit’ organization, they decided to make a move to create a new team in the valley. Three years ago the team became the Mountain Ridge team after numerous players were not selected to another local team in Glendale.

“We morphed out of the Arrowhead Warriors and strictly because we had so many kids from Mountain Ridge that were denied entrance to the (for-profit) team,” Tavrytzky said. “This was especially sad because US Lacrosse number one goal is to ‘Grow the Game,’ but we had kids that could not play.”

Lacrosse is not recognized by the Arizona Interscholastic Association, currently competing in the Arizona Lacrosse League – Division II. Tavrytzky said they have tried in the past, but were denied by the AIA board of directors.

Sports that apply to AIA make a presentation to the executive board discussing growth, cost, playing facilities and participation at lower levels. If the board decided to move forward, the sports are placed on a 3-5 year pilot program before being reviewed and accepted into AIA. Beach volleyball is the last sport to be added and will be a full sport in AIA beginning next season after five years.

“I think it is a budget issue for (high schools) from what I have heard, however, I also think the league is giving up a great opportunity to lobby for it as Governor Doug Ducey’s son is a starter for (Phoenix) Brophy Prep,” Tavrytzky said.

Tavrytzky said lacrosse has been one of the fastest growing sports in Arizona the past few years with colleges from Arizona State, University of Arizona, Grand Canyon and Northern Arizona University all having  lacrosse teams.

“(Lacrosse) is not recognized in Arizona, but it is in surrounding states such as Calif., Colo., Utah, Texas, Oregon and Wash.,” Tavrytzky said. “I think it is not fair that AIA adds sand volleyball and badminton for girls, but do not look at the nationwide growth of lacrosse and get behind it.”

Tavrytzky said everyone who tries out for the team makes either the varsity or junior varsity team, with a total of 29 on the varsity roster this season. They have been led by Jakob Raider (Millennium), Brady Wijbrandts (Northwest Christian), Tanner and Tyler Tavrytzky (Mountain Ridge), Jared Garten (Mountain Ridge), Kaleb West (Centennial), Dylan Price (Centennial), and Brandon Edelson (Estrella Foothills).

Wijbrandts led the Mountain Lions with 30 goals and 24 assists while Tyler Tavrytzky had 25 goals and five assists. Raider had 13 goals, West and Tanner Tavrytzky and Edelson with nine each.

“We knew from day one that this team had the talent to challenge for a title,” Tavrytzky said. “Head coach Leigh Dipace, who was an assistant at Brophy Prep and helped lead them to three Divisions I championships, and our assistant coach John Boggs have been strong leaders.”

Tavrytzky said they are planning to present the sport to AIA again, but are just waiting for the right time to try and get it recognized in the state.

“Supposedly the (Arizona Lacrosse League) has been trying to get the sport recognized by AIA and will continue,” Tavrytzky said. “We are lobbying for acceptance and will continue to fight for it.”

Never miss an issue. Sign up for free today.